I want to be upfront in saying that I don’t commonly read much crime fiction.  When I do, it’s usually a sign that I’m depressed. It’s just one of those inexplicable things; I only reach for crime fiction when I’m in a very dark place and want to do nothing more than curl up on the couch and avoid the world.

This book is an exception because I read it for research. I’m currently writing a short story collection based on paramedics and I heard that Australian crime writer, Katherine Howell, writes crime fiction that puts her fifteen-year career as a paramedic to very good use.

Deserving Death is the seventh of eight books that follow the career of Ella Marconi, a detective based in Sydney, Australia. What makes these books interesting to me is that apparently the storylines all feature paramedics as victims, suspects, witnesses or characters that pursue their own independent investigations. So, in the interest of my own work, I decided to read them to see how Howell weaves her paramedic experience into the writing of crime fiction.  My Mum is a crime fiction aficionado and loaned this copy to me last weekend. 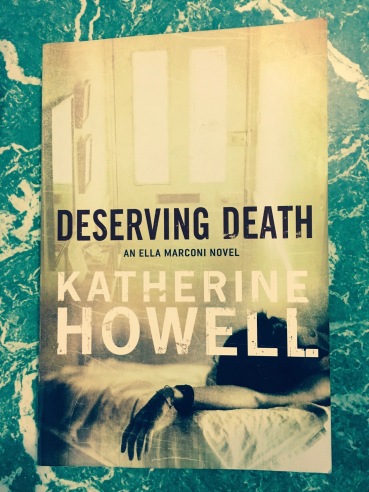 In a nutshell, two paramedics are murdered in swift succession and Detective Ella Marconi is tasked with determining if this is coincidence or the work of a serial killer.  The second victim’s close friend and paramedic colleague, Carly Martens, is immediately suspicious of both the victim’s police officer ex-boyfriend and Carly’s own ambulance partner. She impulsively embarks on an investigation that puts her own life in danger.

I was impressed. Deserving Death is solid and engaging crime fiction. The paramedic characters were completely believable and I appreciated the substantial representation of female paramedics and the plot prominence of a lesbian couple dealing with the issue of coming out to a less than open-minded family.

My one quibble was with the interjection of the killer’s point-of-view at various points throughout the narrative. It was unnecessary, didn’t enhance the suspense and seemed to be included just to salt the plot with a few extra clues. Considering the number of female characters, it only served to immediately eliminate a significant proportion of the suspect pool since it revealed the killer as male. Before you type out an angry comment about me giving away too much, this can hardly be called a spoiler since the killer’s POV is first introduced on pg. 78.

Anyway, as I was reading it purely for the paramedic content I thought it was a valuable enough resource to justify asking Mum to chase down the other seven books. She only buys crime novels in second-hand bookshops and book exchanges so I don’t feel guilty – she’ll definitely read them first.